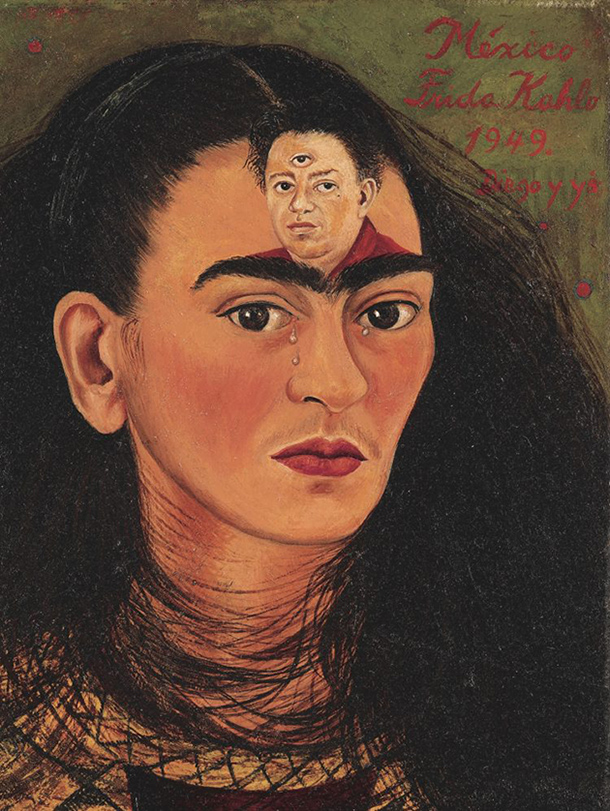 A central artpiece of the exhibition Third eye. The Costantini Collection in Malba is Diego y yo [Diego and I] (1949) by Frida Kahlo (Coyoacán, 1907–1954), which set a record for Latin American art when Costantini acquired it for his private collection in November 2021. It was the last self-portrait bust Frida painted before she died in 1954, which depicts the face of her husband Diego Rivera as a third eye. This work will be displayed with Autorretrato con chango y loro [Self-portrait with monkey and parrot] (1942) of Malba Collection and a considerable collection of documents, including Frida Kahlo’s photographs, letters and personal effects.

“The accident changed my life: Ever since, my obsession has been to begin again, painting things exactly as I see them, relying on my own eye—nothing else.” The daughter of Matilde Calderón, a Catholic mestiza, and Guillermo Kahlo, a German Jew, Frida Kahlo had an inclination for science and an exacting eye from the time she was small. In 1925, when she was eighteen years old, the car she was driving in was hit by a train, and her spine was fractured multiple times. In the years following the accident, some twenty-seven operations were performed on her. Though Frida had met Diego Rivera in 1922, when he was making the murals for the Bolívar Amphitheater, their romance did not begin until 1928. One year later, they were married.

Diego and I symbolizes the tempestuous relationship between Frida and Diego, who were married for almost 25 years in a passionate and turbulent marriage. Though Kahlo opposed Catholicism, which had been passed down to her from her mother, she did use elements of Catholic iconography in her art. Indeed, spirituality pervades her life and work. Her transcendental vision was informed by how ancient Mesoamerican cultures view death, a vision tied to a cyclical conception of time where life and death are joined in an endless continuum. No less prevalent in her worldview are Egyptian culture, Hinduism, Buddhism, and occult teachings (indeed, that is where the representation of the third eye in the work Diego y yo comes from). Dualism is a common theme in her work, first and foremost in the binary between her own person and Diego, a dualism tied to universal dialectics like the masculine and the feminine, life and death, sun and moon, and body and mind.

Self-Portrait with Monkey and Parrot, 1942 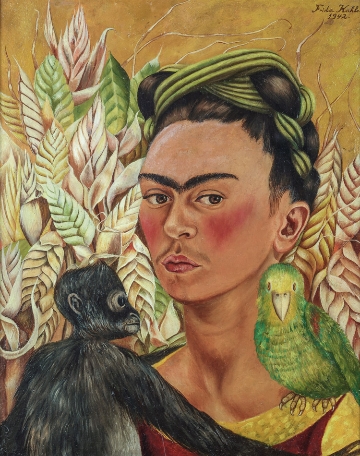 Self-Portrait with Monkey and Parrot was made in the early 1940s, when Frida Kahlo, having gained international fame through exhibitions in New York and Paris, was trying to speed up her production in order to make a living from painting. The work follows a standard compositional format used in portraits and self-portraits of the early 1920s: the subject, seen from the waist or chest up, occupies a narrow space between the picture plane and a wall of vegetation that sometimes reaches the edges.

This self-portrait is executed with rigorously controlled brushstrokes – except for the fur and feathers – typical of the paintings she completed at the peak of her career. The direct, frontal presentation of the character follows a model inspired in part by popular 19th-century portraiture, a type that Kahlo and Rivera collected and displayed in their family home in Coyoacán, which the artists shared at the time.

Know more about this work

Since her father was a professional photographer, there is a large archive of images of Frida as a child and adolescent, which was by no means common at that time. Those images show Frida with her sisters and friends—among them Isabel Campos, her future epistolary confidant when the artist was not in Mexico—before she began producing self-portraits. Many of the images here were taken at the house in Coyoacán where Frida was born. With the help of Juan O’Gorman, architect and friend of the couple, she and Diego would later turn it into “La Casa Azul.” This was also where Frida gave painting classes. In 1943, her students painted murals in a local pulquería called “La Rosita.” At the murals’ unveiling, her disciples, known as “Los Fridos,” spoke of her ability to teach others to paint and show life exactly as they saw it.

As is evident in their extensive collection of pre-Columbian handicrafts and Mexican objects, Kahlo and Rivera shared a profound interest in pre-Hispanic cultures and Mexican traditions. Frida was particularly interested in Judas del Sábado de Gloria, a figure associated with Easter in Mexico. Indeed, some papier-mâché dolls of that character made by craftswoman Carmen Caballero surrounded her bed at the Hospital Inglés where, in 1950, seven operations were performed on Kahlo’s spine. Despite her weak health and confinement to bedrest, Frida kept painting until her final days. In April 1953, soon before her right leg was amputated, she attended her first solo show in Mexico, held at the gallery of her friend Lola Álvarez Bravo. She was last seen in public in 1954, at a demonstration against the ousting in Guatemala of the democratically elected government. 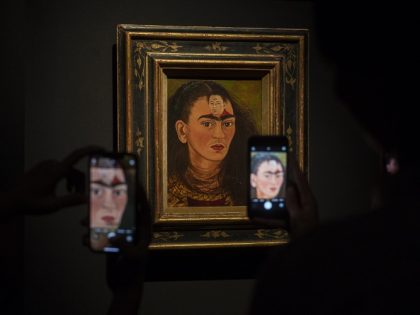 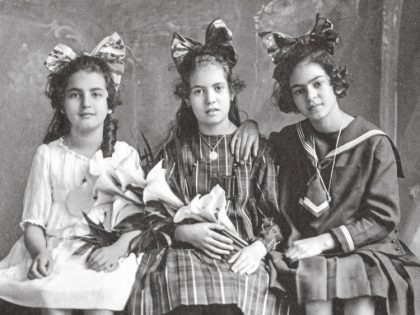 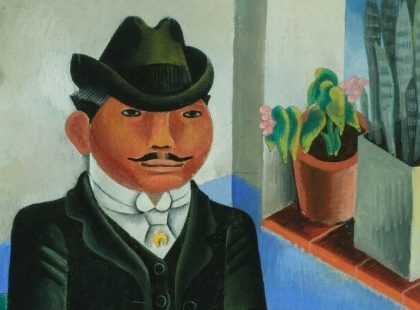 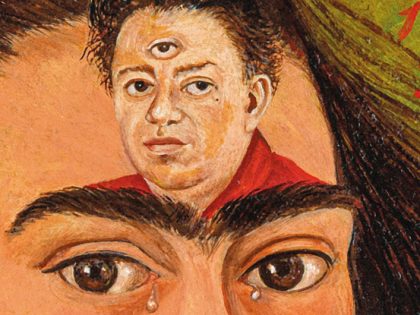